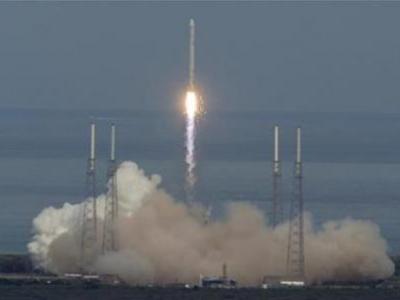 A SpaceX Falcon rocket blasted off on Sunday from a Florida launch pad once used to send NASA astronauts to the moon, a step forward for billionaire entrepreneur Elon Musk and his company’s goal of ferrying astronauts to the International Space Station.

The 229-foot tall (70-meter) Falcon 9 soared off a seaside launch pad at the Kennedy Space Center at 9:39 a.m. EST (1439 GMT) carrying a Dragon cargo ship that holds supplies and science experiments for the station.

Nine minutes after blastoff, the main section of the rocket flew back to a landing pad at nearby Cape Canaveral Air Force Station, the eighth successful touchdown for Space Exploration Technologies Corp.
“Baby came back,” Musk wrote on Twitter, celebrating the landing. SpaceX had decided to delay the mission on Saturday, 13 seconds before launch due to concerns about the steering system in the rocket’s upper stage.

The National Aeronautics and Space Administration closely monitored Sunday’s launch to learn more about the company’s operations before it clears SpaceX to fly U.S. astronauts.

The liftoff marked a successful debut for SpaceX at Kennedy’s Launch Complex 39A, originally built for the 1960s-era Apollo moon programme and later repurposed for the space shuttles. SpaceX plans to use the pad for commercial missions, as well as future manned flights.

The pad was last used for the final space shuttle launch in 2011. In 2014, SpaceX signed a 20-year lease and has spent millions on remodeling.
“It was really awesome to see 39A roar back to life,” SpaceX Dragon programme manager Jessica Jensen told reporters after the launch. “This is a huge deal for us.”

It was also SpaceX’s first launch from Florida since an accident in September caused heavy damage to what had been the company’s prime site at Cape Canaveral Air Force Station, located just south of the NASA spaceport.

NASA hired SpaceX to fly cargo to the station after the shuttle programme ended. SpaceX and Boeing Co (BA.N: Quote) are scheduled to begin flying crews to the station by the end of 2018, but a U.S. government report last week said technical hurdles likely will delay both companies.

Last month, SpaceX resumed flying its Falcon 9 rockets using a second launch pad in California, where the first stage of the rocket also succeeded in relanding.

The company plans to reuse the rockets to slash costs and reduce pricing.

SpaceX aims to have the Florida launch pad damaged in last year’s explosion up and running by this summer.