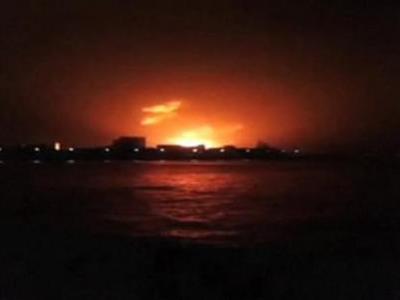 Eighteen Indian sailors were trapped and some killed after an explosion and fire on a diesel-powered submarine berthed at a base in Mumbai on Wednesday, souring a week of naval milestones, including the launch of a locally built aircraft carrier.

The explosion just after midnight was likely an accident but an investigation was under way to establish the cause, the navy said.
“There are some people trapped on board. We are in the process of trying to rescue them,” said Navy spokesman P.V.S. Satish. “We will not give up until we get to them.”

Photos distributed by social media users appeared to show a large fireball over the Navy dock where the Kilo Class diesel-electric submarine was berthed.

The Indian vessel, which returned from an upgrade in Russia earlier this year, suffered a similar accident in 2010 when one sailor was killed while it was docked in the southern port of Visakhapatnam.

Typically, such a submarine is fitted with torpedoes and missiles. Torpedoes are launched underwater to attack other submarines while missiles are used for long ranges above water. There was no immediate word on the status of the weapons on board the Sindhurakshak.
“Lots of things are in very close proximity. There is fuel, there is hydrogen, there is oxygen, there are weapons with high explosives on board,” said retired Indian navy chief Arun Prakash.
“So a slight mistake or slight accident can trigger off a huge accident. The question of sabotage – I mean, all possibilities have to be considered – but sabotage is the probably the last possibility.”

India’s navy has had far fewer accidents than its air force dogged for years by crashes of Russian-made MiG-21 fighters.

However, the country’s fleet of submarines is in urgent need of modernisation and has been hampered by delays in government decisions as it battles corruption allegations. According to the Indian Navy website it operates 11 Sindughosh Class (Russian Kilo Class) submarines and one Chakra Class, an Akula nuclear powered submarine.

Efforts to build a domestic arms industry to supply the military have made slow progress with the country still the world’s largest importer.

Earlier this week a locally built aircraft carrier slipped into the sea, though it is not due for completion until 2017. The Navy also announced that the reactor on its first indigenous nuclear submarine was now operational as part of a plan to build a powerful maritime force to counter China’s growing presence in the Indian Ocean.

INS Sindhurakshak completed a two year and six month upgrade at a Russian shipyard a few months ago.

The vessel, which was fully operational with weapons on board, was half-submerged after the fire. A team of navy divers was mobilised to search for survivors and 16 fire tenders were brought in to put out the blaze, local media said.
“There was a loud explosion past midnight and I woke up,” said Dharmendra Jaiswal, who manages a public toilet opposite the naval dockyard. “I could see the skyline was bright and I could make out that some fire or blast had occurred inside.”

Three people who were near the submarine at the time of the explosion were injured and being treated in hospital Satish said.