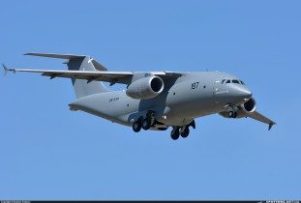 Ukraine’s state-owned defence conglomerate Ukroboronprom has won a tender to supply the An-178 aircraft to Peru.

The contract to replace the Peruvian police’s single Antonov An-32Bwas awarded by the Peruvian ministry of Interior, through the Foreign State Contracting Evaluation Committee (CECEE) and is the first export of the new aircraft.

The CECEE evaluated the operational characteristics, delivery times, extended warranties, personal training and social and industrial offset of the An-178 and its competitors, the C-27J and C295M. The Antonov An-178, presented by Spetstechnexport, a state-owned foreign trade enterprise that is a part of Ukroboronprom, scored 80.02 points and was offered at around $65 million per unit.

In second place was the Leonardo C-27J Spartan, presented by the Italian National Armaments Directorate, which scored 66.22 points and was also offered at around $65 million per unit.

In third place was the Airbus C295M, presented by the Directorate General of Armaments and Material (DGAM) of Spain, which scored 58.60 points and was offered for $55 million per unit.

The military transport aircraft has a 167m3 cargo bay with a maximum carrying capacity of 18 tons or, depending on the aircraft’s purpose, 90 fully equipped military personnel, 84 paratroopers, 48 stretchers or 8 health modules and 12 doctors.

According to the press office of Antonov, the An-178 has now piqued the interest of countries in Asia and Latin America and has received a domestic request by the Ministry of Defence, which plans to acquire 15 An-178s.

The An-178 was designed by Antonov and is being manufactured by Antonov Serial Production Plant, formerly known as AVIANT. Its maiden flight was on 7 May 2015 and while it is currently in production it is still in the process of receiving the relevant certification.