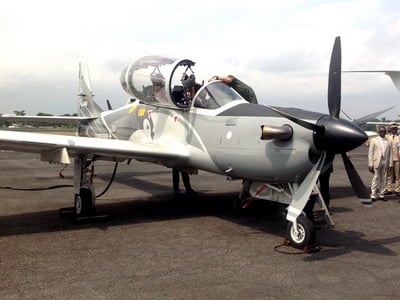 The US State Department has approved the possible sale of 12 A-29 Super Tucano aircraft, along with weapons, spares and training, to Nigeria in a contract that could be worth $593 million.

The US Defence Security Cooperation Agency (DSCA) on 3 August announced that the possible Foreign Military Sale had been approved and Congress had been notified on 2 August.

The prime contractor is the Sierra Nevada Corporation, headquartered in Centennial, Colorado. The company is building Super Tucanos for the Afghan Air Force and Lebanon at its US facility.
“These aircraft will support Nigerian military operations against terrorist organizations Boko Haram and ISIS West Africa, and Nigerian efforts to counter illicit trafficking in Nigeria and the Gulf of Guinea,” the DSCA said. “The Super Tucano is a sustainable platform for counterterrorism, counter-insurgency, border surveillance, and illicit trade interdiction operations.”

The DSCA went on to say in a notification that Nigeria is an important partner in the US national security goal to defeat ISIS, including its branches in Africa, and this sale is part of the US commitment to help Nigeria and the Lake Chad Basin countries in that fight. “The proposed sale, and associated training and engagement, is one piece of broader U.S. security cooperation to help professionalize, modernize, and build the capacity of Nigeria’s armed forces and strengthen the US security relationship with Africa’s largest democracy.”

Foreign Military Sale to the Government of Nigeria of twelve (12) A-29 Super Tucano aircraft and weapons, including all associated training, spare parts, aviation and ground support equipment, and hangar, facilities, and infrastructure required to support the program. The estimated total case value is $593 million. The Defense Security Cooperation Agency delivered the required certification notifying Congress of this possible sale on August 2, 2017.

The potential sale will include logistics support, training, spares, ground support equipment and infrastructure. This will include special training on the law of armed conflict and human rights, and air-to-ground integration to minimize civilian harm in air operations.

Nigeria has been seeking Super Tucanos since 2015, but concerns by the Obama administration about Nigeria’s human rights record put the deal on hold. When Donald Trump came into office the deal started moving forward, but, according to Defense News, the sale may encounter turbulence.

In June, US Senators Cory Booker, D-N.J., and Rand Paul, R-Ky., sent a letter to Secretary of State Rex Tillerson saying, “We are concerned that the decision to proceed with this sale will empower the government to backtrack even further on its commitments to human rights, accountability, and upholding international humanitarian law, which in turn could spur greater unrest and violence, particularly in the northeastern part of the country.”

US Congress may block the sale – a Congressman earlier this year put on hold a proposed sale to Kenya of armed Air Tractor aircraft due to alleged anti-competitive behaviour by its manufacturers.

Embraer has recorded a number of orders for its Super Tucano from African countries, which see it as a low cost light attack aircraft that can also be used as a trainer. On the continent, the Super Tucano has been ordered by Angola, Burkina Faso, Mauritania, Mali, Ghana and Senegal.