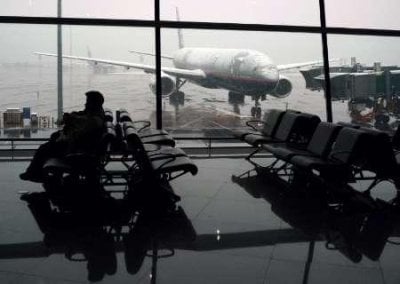 Air Passenger Duty (APD) paid by holidaymakers for flights abroad will be frozen for a year but private jet users will have to pay a tax in the same way as those on commercial airlines.

Announcing his budget on Wednesday, Chancellor George Osborne said a planned increase to APD this year would be scrapped, a move seen as part of government attempts to soften the impact of rises in VAT and national insurance on low and middle earners.
“The government is launching a consultation on reform of APD … and will also freeze APD rates for 2011-12,” Osborne told parliamentarians. But he did not announce a switch to a per-plane tax as some airlines had sought.
“The government will not introduce a per-plane duty at the present time, given concerns over the legality and feasibility of this approach … but will start a programme of intensive work with our international partners to build consensus for a per-plane duty in the future.”

Osborne said private jet users would have to pay a passenger duty in the same way as those on commercial airlines, a move expected to cost executive flyers tens of millions of pounds each year and which was seen as an effort to show high earners will have to share the pain of austerity measures.

Freezing APD will cost the Treasury around 150 million pounds and will spare a family of four some 36 pounds on long-haul flights.

APD is paid by all travellers leaving Britain in four bands depending on the length of the flight. It was introduced in 1994 at the rate of 10 pounds for long-haul flights but has risen significantly over the last two years.

Shares in airlines and travel firms fell on disappointment that APD had not been scrapped in favour of a per-plane tax.

Europe’s second biggest tour operator Thomas Cook welcomed the freeze on APD which it described as “fundamentally unfair” but expressed disappointment the government had not switched immediately to a per-plane tax.
“We’ve always supported a move to a per-plane duty,” said Chief Executive Manny Fontenla-Novoa in a statement.
“It is therefore extremely disappointing they (the UK government) have not honoured their commitment to make this change which would have been fairer on the passengers and would have encouraged a more environmentally friendly approach by all airlines.”

The British government has also come under increasing pressure from airlines to drop APD in recent months because they have been hit by rising fuel costs.

Brent crude has risen 20 percent so far this year, driven by uncertainty over Libya and fears that violence could spread to other top oil producing nations. A barrel for April delivery now costs around US$116.

Underlining the issue of rising oil prices, airlines around the world have raised fuel surcharges on flights to offset higher fuel bills.
“Although this move is a very welcome first step, Britain still has the highest air taxation of all European and G20 countries,” said Julie Southern, Virgin Atlantic’s chief commercial officer.
“APD can be further reformed to increase UK competitiveness whilst delivering the right environmental signals.”