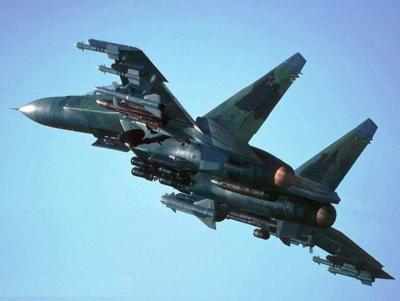 A recently delivered Sukhoi Su-30 may have crash-landed at Entebbe International Airport, with witnesses contradicting official statements claiming it was a small training aircraft.

Some international flights were delayed late on Monday whilst the wreckage was removed from Entebbe airport.

Ugandan People’s Defence Force spokesperson Colonel Felix Kulyaigye said that a small training aircraft undertaking a normal and routine simulated crash landing exercise encountered a minor error while landing at the Entebbe.
“The two pilots manning the aircraft however, landed safe and were not in anyway injured. There were no passengers on board,” he said. “Engineers are working to establish and rectify the cause.”

The paper quotes witness Isaac Mukasa as saying he saw a fighter jet land on its belly on the runway at Entebbe and fire trucks rush to its rescue. “I was at Kigungu stage and heard a bang on the runway prompting us to run and see what was happening. I then saw the jet moving on its belly for some distance and it stopped,” he said adding: “Two fire trucks then hurried to pour water on the plane before two crew members jumped out and later security operatives chased us away.”

Hasjif Kabanda, a resident of Kigungu, said he heard a bang and later people in Kigungu started shouting that a fighter jet had crashed.

South African Airways and Kenya Airways were diverted to Nairobi while Quatar Airlines flight was delayed because the runway was blocked until 9:20 pm, when flights resumed, more than three hours after the accident.

Late last month Uganda received another two Su-30MK fighters from Russia, after taking delivery of the first aircraft in July. The country has six on order.

It has emerged that one of the first Su-30s delivered was inoperable for three weeks following a bird strike on September 8. The aircraft was taking off from Entebbe military airbase when a bird struck one of the engines, but the pilot was able to land the aircraft safely, according to The Daily Monitor. Rosoboronexport fixed the engine as part of a three year warranty.

On April 7 this year the Wall Street Journal reported that Uganda bought between six and eight fighters and other military equipment from Russia, worth US$744 million.
“The executive arm of government which is mandated with the security matters of this country took a decision to buy these jets because we need them,” Kabakumba Matsiko, Uganda’s information ministerMatsiko told Reuters in April.

The last major aviation accident in Uganda occurred in 2009 when a Russian IIyushin plunged into Lake Victoria shortly after take-off at Entebbe. It was destined for the Somali capital Mogadishu with supplies for the African Union peacekeeping force there, Xinhua reports. Eleven people died among which included four crew members and seven passengers.