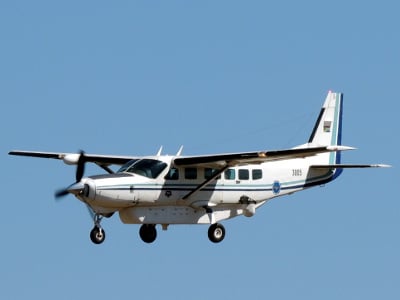 Two South African Air Force (SAAF) pilots were injured when the Cessna Caravan they were travelling in crash landed outside Air Force Base Langebaanweg during a night flying exercise today.

Defence Corporate Communications spokesman Siphiwe Dlamini said in a statement that the aircraft crash landed on a private farm just past midnight. “The pilots were recovered by the Base Rescue Capability. Both pilots sustained varying degrees of injuries and they are currently hospitalized.”

The unofficial South African Air Force website reported that a Lieutenant Colonel and a Captain were critically injured and taken to a nearby private hospital. Apparently at least two C-130 Hercules and other light transport aircraft were seen flying between AFB Langebaanweg and AFB Ysterplaat over the last few days, indicating a training exercise was underway.

This is the most serious Caravan incident since three people died and two were injured in a crash in Mpumalanga on 17 June 2014. In that incident, the aircraft, from 41 Squadron, was one of five Cessna 208Bs deployed to Nelspruit Airport for a training camp.

The SAAF received 13 Caravans from1988, but now four have been lost in accidents.

This most recent crash is the fourth in the last five years. In December 2012 a C-47TP crash in the Drakensberg killed 11 and all five people aboard an A109 Light Utility Helicopter died when their aircraft crashed in the Kruger National Park in March 2014.