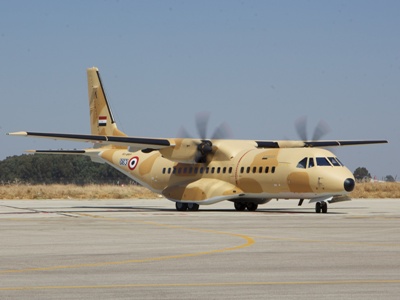 The Spanish government has suspended the delivery of six Airbus Military C295 transport aircraft to Egypt. Nations across the world are putting Egyptian defence contracts on ice following continued instability in the North African country.

On August 28 the Spanish Inter-Ministerial Council on Defence and Dual Use Materiel (JIMDDU) suspended all existing Egyptian defence contracts, saying the move was cautionary and would be reviewed every month.

Egypt ordered three C295s in October 2010; three more in March 2012 and another six in January this year. The delivery of the last six was scheduled to commence at the end of the year, according to IHS Jane’s, which added that the C295s account for 90% of the value of Spanish defence sales (50 million euros in 2012).

Spain has stopped issuing new defence export licenses to Egypt, with other countries following suit – last week European Union foreign ministers recommended the halt of military supplies to Egypt, although they stopped short of issuing an arms embargo. Member states agreed to suspend the export of offensive weapons to Egypt that may be used for “internal repression”.

Germany earlier suspended all export licenses indefinitely. The country exported 13 million euros worth of equipment to Egypt in the first half of 2013, according to Defense News. This was mainly for Navy communications equipment.

Meanwhile, on Wednesday US Defence Secretary Chuck Hagel said the United States will not immediately halt military aid to Egypt, although this may happen “maybe eventually”. The $1.3 billion in military aid it sends to Egypt every year is one of its best bargaining tools and friendly military relations with Egypt also ensure US military overflights and Navy ship transits through the Suez Canal go smoothly.

Defense News quotes a US Army spokesperson as saying that the US began delivering the first Abrams tank kits to Egypt last month, where they will be assembled. In 2011 a $395 million deal was signed with General Dynamics Land Systems to supply Abrams tanks to the Egyptian Army, expanding its Abrams fleet to 1 130 over the next three years.

Many other countries also supply weapons to Egypt – Amnesty International earlier this month said that some suppliers include the Czech Republic, China, Cyprus, France, Germany, Italy, Serbia, Spain, Switzerland, and Turkey. These supplies include firearms, shotguns, riot control launchers and corresponding ammunition and projectiles, as well as armoured vehicles and military helicopters.
“Weapons and equipment supplied irresponsibly to Egypt by a handful of countries are being used for excessive force and unlawful killings,” said Salil Shetty, Secretary General of Amnesty International.
“Deliveries must be frozen until full, prompt and impartial investigations into the recent violence – and similar incidents over the past several years – have been carried out and their findings made public. How could any state continue to deliver equipment used to disperse demonstrations knowing full well the Egyptian security forces’ track record?”

Instability and violence has racked Egypt since the military took over from Mohammed Morsi’s democratically elected government on July 3. Over 1 000 pro-Morsi protestors have been killed in recent weeks.