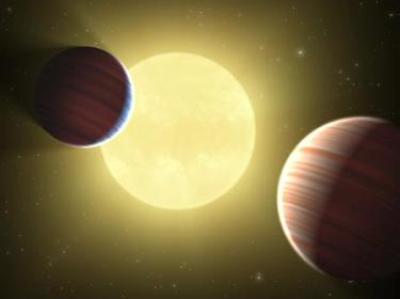 Astronomers have spotted a strange new solar system with small “puffy” planets packed in close orbit to their sun.

The discovery, published in the journal Nature on Wednesday, is mystifying astronomers for the time being and illustrates just how much variety is possible in the universe.

The team at NASA and a range of universities has named the system Kepler-11, after the orbiting Kepler space telescope that spotted it, Reuters reports.
“One of the most striking features about the Kepler-11 system is how close the orbits of the planets are to one another,” they wrote in their report.

The star resembles Earth’s own sun. But five of the planets orbiting it are packed into a space equivalent to the distance between Mercury and Venus in our own solar system.

And they are bigger and puffier than the rocky inner planets of our solar system, Earth, Venus, Mars and Mercury, the scientists said. However, they are some of the smallest exoplanets — planets outside our solar system — ever seen.
“They are much more closely packed … than any other planetary systems known, including our own,” said Jack Lissauer, a scientist at NASA’s Ames Research Center in California.
“It is clear that such planets need not resemble the Earth in any way,” Jonathan Fortney of the University of California, Santa Cruz, added in a telephone briefing.
“The low-mass planets in the Kepler-11 system appear to be more like small Neptunes than giant Earths.” Neptune, Jupiter, Saturn and Uranus are the giant gassy planets on the outer reaches of our solar system.

Astronomers have now found more than 500 exoplanets. Most are giant, because they are so far away that only the biggest are detectable. But researchers are certain there are Earthlike planets out there.

Fortney believes Kepler can eventually find them, if the telescope designed to find Earth-like planets orbiting other stars can orbit Earth long enough to collect the data.
“If it goes past its three-year mission — six, eight, 10 years — then we might get enough data,” he said.

No telescope is powerful enough to directly visualize a planet orbiting another star. Instead, scientists use indirect means to find them.

Kepler measures the light coming from a star. A planet passing in front of the star as it orbits will dim this light just slightly. The researchers can them compute the planet’s size and how quickly it is orbiting from this information.

In this case, the flickering light suggests a system of at least six planets, spinning rapidly around the star. One is orbiting farther out that the other five but they all appear to be made mostly of gas and orbiting in a very flat, circular plane.

Kepler, launched in March 2009, is measuring the light from 100,000 stars in the constellations Cygnus and Lyrae. The hope is to find planets about the size and composition of Earth, inside the so-called habitable zone, where it is warm enough for liquid water to exist but not too hot for life.

Last month Kepler scientists confirmed the discovery of its first rocky planet, named Kepler-10b and just 1.4 times the size of Earth.
“We think it is likely that Kepler is going to find oodles and oodles of Earths,” astrobiologist Alan Boss of the Carnegie Institution of Washington said in 2009.