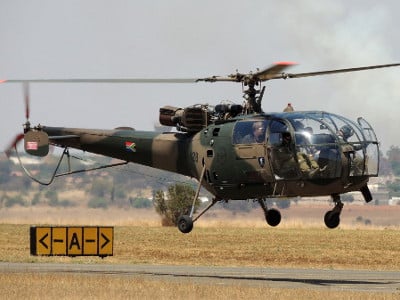 According to the Beeld and The Zimbabwean, the aircraft and spares are ready to be shipped to Namibia, although final approval and official confirmation has not yet been received. South African National Defence Force (SANDF) spokesman Brigadier General Xolani Mabanga last week confirmed the helicopters were not destined for Zimbabwe’s Air Force but could not say if they were going to Namibia as the relevant authorities would have to confirm such plans.

Beeld reports that the French government has approved the transfer to Namibia and that the aircraft have been modified for commercial use with all military equipment removed, meaning the National Conventional Arms Control Committee (NCACC) does not have to approve the transfer.

Namibia’s defence minister Nahas Angula last week told The Namibian he had no knowledge of the proposed transfer but said the Alouette III donation would be a welcome addition as the type could be used for things like flood relief and accessing remote areas.

The 12 Alouette IIIs were originally destined for Zimbabwe, but their delivery was halted by a court order obtained by AfriForum last year over fears the Zimbabwean government would use the aircraft against its citizens. AfriForum is a civil rights organisation linked to the Solidarity trade union.

Willie Spies, AfriForum’s legal representative, said the cancellation was a victory for human rights in the region. He said he had no objection if the helicopters went to Namibia as they were still prevented from going to Zimbabwe. However, “if it should happen that the donation to Namibia was merely a set to have the helicopters delivered to Zimbabwe in any event, a complaint of contempt of court will be brought against the relevant ministers and officials.”