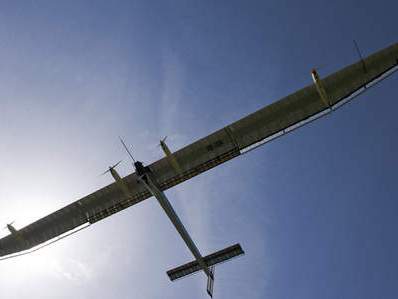 An experimental solar-powered plane has made aviation history by becoming the first manned aircraft to fly throughout the night with no fuel. The Swiss-made aircraft has defied all predictions by landing safely after more than 26 hours in the air on nothing but batteries powered by the sun.

Pilot, Andre Borschberg, is a big man. He emerges from his bathtub-sized cockpit to a hero’s welcome. He has just pulled off an historic feat. He has just flown 26 hours, nine minutes and 33 seconds proving that an airplane can fly through the night on solar energy alone, the UN News Service reports.
“So many things happened since yesterday,” he explains. “And, everything went very well. It is really unbelievable. So, we did better and more than what we expected to do and what we wanted to do. So, it is really a success.”

Borschberg started his historic flight aiming to prove the Solar Impulse plane could stay in the air nonstop for 25 hours. He says he has exceeded his expectations.
“It is so important because-that is the most important milestone of the project to demonstrate that it is feasible,” he says. “It is feasible to fly day and night, which means that this technology can be used to save energy, to produce energy. That is exactly what we wanted to show.”

Borschberg says the Solar Impulse Team discussed the possibility of extending the flight, but decided to stop because there was nothing left to prove.

Indeed, the plane ended its voyage with more power in its 12,000 solar cells than when it had begun.

The solar airplane has an enormous 63-meter wingspan. It is as wide as a jumbo jet, but weighs only 1.6 tons, the same as a mid-sized family car. The solar cells collect the energy of the sun’s rays. The propeller driven plane travels a relatively slow 70 kilometres per hour.

Piccard says new technologies such as this can help the world rid itself of its dependency on fossil fuel. He says alternative energies can help save energy and save natural resources. The Solar Impulse team says the success of the flight shows it is possible to keep a solar-powered plane in perpetual motion. It proves a plane can be kept in the air continually around the clock.

They say they plan to test this hypothesis by building a new, more advanced model of the plane, which they aim to fly around the world by 2013.