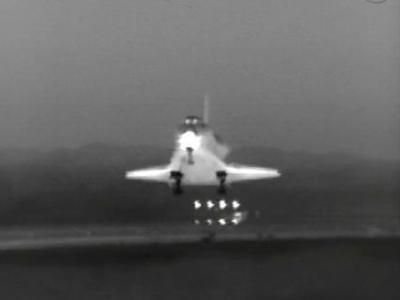 The space shuttle Endeavour touched down at its Florida home base early capping a 16-day mission to deliver a premier science experiment to the International Space Station on NASA’s next-to-last shuttle flight.

Sailing through night skies, the shuttle and its six-man crew glided towards the Kennedy Space Centre, circling high overhead to burn off speed and setting off a pair of sonic booms, heralding the ship’s homecoming.

Commander Scott Kelly, a four-time shuttle veteran, gently eased the 100-tonne spaceship onto the runway, touching down at 2:35 a.m. EDT to complete Endeavour’s 25th and final flight, Reuters reports.
“Your landing ends a vibrant legacy for this amazing vehicle that will long be remembered. Welcome home, Endeavour,” astronaut Barry Wilmore radioed to Kelly from NASA’s Mission Control in Houston.
“It really is an incredible ship,” Kelly replied. “It’s sad to see her land for the last time but she really has a great legacy.”

Endeavour racked up 123 million miles (198 million km) in 25 spaceflights. It will now be prepared to be put on display at the California Science Centre in Los Angeles.

NASA’s attention shifts to sister ship Atlantis, which was rolled out to the shuttle’s seaside launch pad as Endeavour headed back to Earth.

Atlantis is slated to launch on July 8 on NASA’s final planned shuttle mission, a supply run to the space station.
‘AS BEAUTIFUL AS THAT’
“It’s going to be a long time until you see a vehicle roll out to the pad that looks as beautiful as that,” said Atlantis astronaut Rex Walheim, who was at the Kennedy Space Centre along with his three crew mates to watch NASA’s final shuttle roll-out.
“An airplane on the side of a rocket. It’s absolutely stunning,” he said.

The United States is retiring its three-ship fleet due to high operating costs and to free up funds to develop new spacecraft that can travel beyond the space station’s 220-mile-high (346-km-high) orbit.

The space shuttle Discovery returned from its final voyage in March.

The primary goal of Endeavour’s flight, the 134th in shuttle program history, was to deliver the $2 billion (1 billion pounds) Alpha Magnetic Spectrometer particle detector and a pallet of spare parts to the station.

The crew also made four spacewalks to complete assembly of the U.S. side of the $100 billion outpost, a project of 16 nations that has been under construction since 1998. The last piece to be installed was the shuttle’s 50-foot-long (15 meters) inspection boom, which will now be used to extend the reach of the station’s robotic crane.

Kelly and his crew mates — pilot Greg Johnson, flight engineer Roberto Vittori with the Italian Space Agency, and spacewalkers Drew Feustel, Mike Fincke and Greg Chamitoff — also tested a new automated rendezvous system that NASA plans to use on its next spaceship and on a new robotic science mission to an asteroid.

It will be at least four years before NASA astronauts can fly out of the United States again. Until new ships are ready, Russia will transport crews to the station at a cost of more than $50 million per person.

Kelly and his crew are scheduled to return to Houston on Thursday.

Before leaving orbit, he said he was looking forward to seeing his wife, U.S. Representative Gabrielle Giffords, an Arizona Democrat. The congresswoman is recovering from a January 8 assassination attempt.

Kelly initially took himself off the mission to care for his wife, but rejoined his crew after she was transferred to a Houston hospital for rehabilitation.

Giffords, who travelled to Florida to see the Endeavour launch, was not at the space centre for the landing.