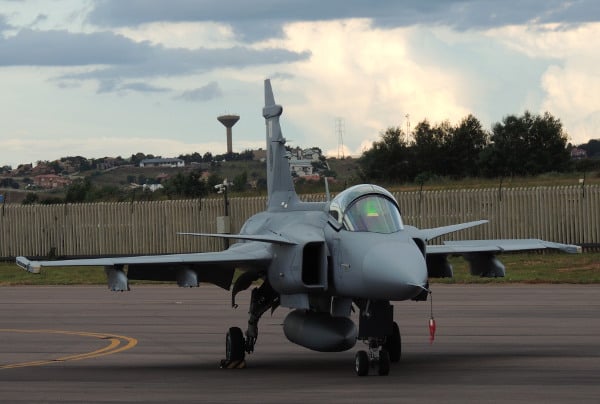 The South African Air Force’s (SAAF’s) Gripen fleet is temporarily grounded, with no aircraft serviceable, due to a lack of funding and maintenance and support contracts not being renewed in time, but it is likely that the Gripens will be flying again in the new year.

“After a lengthy discussion between the South African Air Force (SAAF), through Armscor and Saab on the contract concerning the Gripen, proposals have been presented by both parties and are being reviewed to ensure that the matter is conclusively dealt with by the parties concerned. It is unfortunate that the discussions took longer than expected as a result, negatively impacting on the Air Defence capability,” stated Siphiwe Dlamini, DoD Head of Communication.

He added that, “the SAAF is confident that a solution will be found to resolve this matter. Due to the sensitivity around the discussion, the negotiations cannot be made public.”

Darren Olivier, Director at African Defence Review, notes that, “thanks to this delay, the SAAF’s Gripen fleet has been grounded for three months and probably won’t return to the air until late January at the earliest.”

He believes it’s a crisis caused primarily by severe budget cuts, “but seemingly compounded by a dysfunctional relationship between the SAAF and Armscor and poor contract management. This is a crisis that should never have been allowed to reach this point.”

At least as far back as August this year, negotiations regarding the placement of new support contracts for the Hawk and Gripen were still ongoing due to “high fixed costs”.

defenceWeb understands that maintenance and support contracts have not been renewed in time because of Public Finance Management Act (PFMA) requirements, Armscor implementing Preferential Procurement regulations incorrectly, and funding constraints.

It is believed that half the Gripen fleet of 26 aircraft has been cannibalised for spare parts, while air crew have lost currency due to a lack of flight hours. This is compounded by a lack of PC-7 Mk II trainers available.

The funding crisis affecting the SAAF, and the SANDF as a whole, has also seen the serviceability of other aircraft decline. For example, there are only around a dozen Oryx available out of a fleet of roughly 40. Over the last year only around a third of the Hawk fleet has been operational. Much of the eight-strong C-130BZ Hercules fleet is unserviceable, although two aircraft are airworthy and flying after a major service, and two more are undergoing scheduled maintenance.

The lack of funding also means there is little ammunition available for the SAAF’s combat aircraft.

As far back as 2016, experts were warning that budget cuts coupled with the Rand’s decreasing value could mean the Gripen or Hawk fleets would be permanently grounded (the poor Rand/dollar exchange rate has made it increasingly expensive to acquire spares from overseas). For nearly a decade, the SAAF has been unable to fund the airworthiness of the entire Hawk and Gripen fleets, and half the Gripen fleet has since been in ‘rotational storage’.

According to the 2021 DoD Annual Performance Plan, for 2021/22, a total of R5.969 billion is allocated to the Air Defence programme (essentially the SAAF in its entirety), against a requirement of R7.8 billion. “The shortfall of R1 840 622 000 will adversely impact on the preparation and provision of combat-ready air defence capabilities, maintenance backlog, maintenance of capabilities and aviation safety within the Programme.”

The DoD in August told Parliament’s Portfolio Committee on Defence and Military Veterans (PCDMV) that constrained funding was affecting the ability of the SAAF to provide enough serviceable aircraft, which is negatively affecting flying hours.

Helicopter systems have a critical spares shortage which is because of procurement processes with long lead times and a backlog of spares. Transport and combat systems have similar issues, the PCDMV heard.