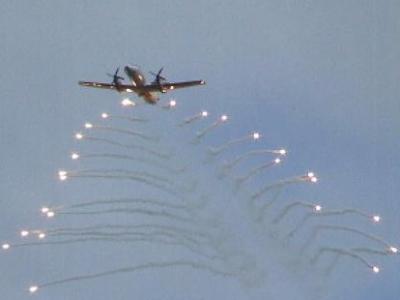 Saab has received an order for the Civil Aircraft Missile Protection System (CAMPS) from charter airline FlyMex based in Mexico and flying on behalf of the United Nations World Food Programme.

CAMPS was developed in South Africa by Saab’s Electronic Defence Systems division (previously known as Avitronics). CAMPS was first demonstrated to journalists at the SA Air Force`s Overberg test facility at Cape Agulhas in March 2007. Naturelink Aviation, the lead client, provided an Embraer 120 airliner for the test. The system was developed to protect commercial airliners and transports against shoulder-launched anti-aircraft missiles.

Speaking at the March 2007 test, Saab Avitronics said there had been 35 documented attempts in the preceding 10 years to shoot down aircraft carrying civilians – including mchines carrying humanitarian aid. Senior marketing and sales executive Frans Vermaak – a former SA Air Force fighter pilot – noted 700 000 such missiles have been manufactured since 1970. At least 150 000 are thought to be in the hands of “non-state actors”, he added.

Vermaak said the major threat to airliners lies in the approach to landing and the moments just after take-off when the aircraft is close to the ground and flying a predictable flight path. It typically takes 10 seconds to fire a missile and another few seconds for it to hit the plane. Missiles are also often fired in pairs. CAMPS, said Vermaak, can identify a missile lock on and launch in a second, and deploy pyrophoric countermeasures via BOA in a further second, proof of fast processing.

Herman Volker, Saab Avitronics` GM of operations, said CAMPS relied on a number of C32-type processors. These are integrated into the four MAW 300 Ultra Violet-based Missile Approach Warner (MAW), typically fitted to each aircraft. They are also integrated into the CAMPS central electronic unit and “BOA” electromechanical dispenser designed to dispense a new, non-pyrotechnical type of IR decoy developed by UK-based Chemring Countermeasures. The C32 processors “are tried and tested,” said Volker. “You don`t want to experiment with new technology where people`s lives are in the balance.

Göran Karlström, Vermaak`s colleague, added the system was designed with cost in mind. The US laser-based Directional Infrared Countermeasures (DIRCM) system was developed after an attempt by al-Qaeda to down an Israeli tourist charter flight in Mombassa, Kenya, in December 2002. It reportedly sells for about $3 million each, but can only engage one missile at a time. For this reason, US military transports using DIRCM carry up to three turrets. Camps will be considerably cheaper. “We plan to sell at one-third of the cost of DIRCM,” Karlström says.

CAMPS design has a heavy emphasis on safety and minimal operational costs, which led Saab to select pyrophoric technology and electromechanical dispensing, Saab marketing and sales executive Stefan Behre said of the FlyMex order. “With CAMPS we can offer a fully automatic high performance protection that counter the MANPADS threat towards transports for humanitarian relief aid, heads of state and VIPs, still using civil aircraft”, he said. “Saab’s commitment is to deliver CAMPS and the necessary support for installation and certification, and provide training and countermeasure simulation results”, continued Behre.

CAMPS is currently in operational service on two types of aircraft: the Lockheed L-382 and Embraer 120. With this order CAMPS will be operated on a new type of aircraft, the Dornier 328JET, Behre note. This brings the number of aircraft where CAMPS has been certified to three and expands the market reach to three continents.