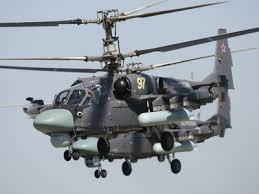 Russian Helicopters on 31 January said one of its subsidiaries – Progress Arsenyev Aviation Company, which is part of State Corporation Rostec, has produced this year’s first Ka-52 Alligator.
“The helicopter built at Progress has already successfully and fully completed all ground and flight tests required by the technical terms and conditions of the government contract. Several more rotorcraft bodies of the new helicopters are at their final assembly point at Arsenyev. In February, another batch of Ka-52 helicopters will be transferred to their operators,” Russian helicopters said.

The first batch of Alligators scheduled for delivery in 2017 per government contract terms was transferred to the Russian Ministry of Defense ahead of schedule in December last year. In 2017, production of these helicopters will be more than doubled as some will be headed overseas, Russian Helicopters said. “The first experimental unit for a foreign customer has already been assembled and is successfully passing all tests as planned.” While not specifically mentioning Egypt, the Ka-52 has no other known foreign orders except for the North African country.
“We took all necessary organizational and technological steps at Progress to expand production in view of the forthcoming volume increase. Today, the plant is ready to produce world-class Ka-52 helicopters in a timely manner, for the Ministry of Defense, as well as for foreign customers,” said Russian Helicopters Deputy CEO for Sales Vladislav Savelyev.

Russia confirmed the sale of 46 Ka-52Ks to Egypt in December 2015. Russian Helicopters Director-General Alexander Mikheyev said deliveries to Egypt are expected to occur in 2017.

Egypt will fly its Ka-52s off its Mistral class landing helicopter dock vessels – these were handed over to Egypt in June and September 2016. As they were originally destined for Russia, they were designed to accommodate the Ka-52K helicopter. Each vessel can operate 16 helicopters.