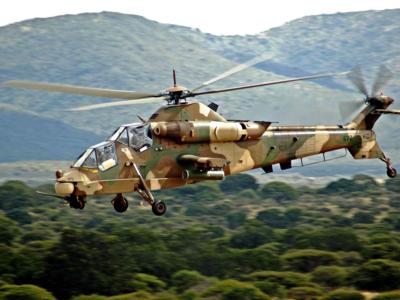 A lack of funds in the acquisition budget is all that stands between the South African Air Force’s small fleet of Denel CSH2A Rooivalk combat support helicopters and Denel Dynamics’ potentially potent Mokopa precision attack missile. The Mokopa was designed as the main counter-armour weapon for the rotorcraft and the two systems were both developed as part of Project Impose.

Chief of the Air Force Lieutenant General Carlo Gagiano last week noted that the weapon was in January qualified off a standard Rooivalk Mark1 Block F helicopter, of which five are now in service with 16 Squadron at Bloemfontein. This means the entire fleet, which will number 11 when the latest round of upgrades are complete, can already fire the laser-guided missile with its 10km-range. Gagiano did add that other than money, the Air Force would still have to develop operational procedures and tactics for the weapon as well as conduct training.

The Ministry of Defence in June 2007 said in answer to a Parliamentary question that the SA National Defence Force had by then spent R120 million (in 2007 Rand) on the Mokopa development programme, with a further R4.6 million due to be spent in financial year 2007/8. “Denel is expected to spend a further R98.25 million (in 2007 currency) to complete the development of the missile. All figures exclude VAT and other statutory costs,” the MoD said in answer to a question asked by then Democratic Alliance deputy defence spokesman Hendrik Schmidt. The answer added that an amount of R70 million (2007 Rand) had “been reserved for the acquisition of operational Mokopa missiles once the development is complete.”

This was, however, at odds with a report in the Business Day newspaper a month before that quoted Denel as deciding that the Rooivalk was not commercially viable and that it would not spend any new money on the helicopters. “Armscor and the defence department will now have to decide whether to subsidise the maintenance of Denel’s Rooivalk capability so that it can continue servicing the 12 [sic] helicopters bought by the South African Air Force over their 25-year lifespan,” the paper said. “The other option would be for the air force to mothball the helicopters and for the costs to be written off entirely.”

Then-Public Enterprises Alec Erwin said in an interview that the departments of defence and public enterprises would have to decide the fate of the Rooivalk. The Denel 2008 Annual Report noted the result of that process: “The SANDF participates in peace support operations thus necessitating armed helicopter support. The Rooivalk helicopter is considered to be a viable option to satisfy this need, and should be completed to meet the revised functional specifications. In considering this need for an armed helicopter capability, Cabinet has decided that Rooivalk should be certified to meet the revised functionality within the existing allocated financial resources.” With that, work to fit the Mokopa and air-to-air missiles to Rooivalk apparently ended.

According to the wikipedia development of the Mokopa began in November 1996, reportedly due to the then-United States arms embargo against South Africa that made the acquisition of the AGM-114 Hellfire impossible. Whether the prospect was ever realistic, actually contemplated or likely is unclear, but the helicopter was initially to be equipped with the tube-launched laser-guided Denel Dynamics ZT3 Ingwe, with a 5km range. Drawings from the 1980s show the rotorcraft carrying up to four bulky launch boxes, each for four of the missiles. Mokopa dispensed with these.

The first air-launched tests of the Mokopa, which has a passing resemblance to Hellfire, from a Rooivalk helicopter took place in 1999, with the first guided tests following in 2000, the online encyclopedia adds. The missile is considered to be very accurate, with an accuracy believed to match that of the company’s other anti-tank missile, the Ingwe, at around 300 mm CEP (circular error probable) at maximum range.

Wessels last year told defenceWeb that although the weapon was developed as a tank killer, “the bulk of the interest in the Mokopa has shifted to non-tank targets.” The Dynamics CE said at the time the Mokopa should be particularly effective with a multi-purpose warhead in support of offshore patrol vessels, such as those contemplated for the SA Navy’s Project Biro. The weapon is also suitable as a secondary PGM for larger vessels,such as frigates. “You cannot fire an Exocet at a small boat, it is overkill,” he says. “There are a number of tenders out for new frigates where the shipyard offer our Umkhonto air defence missile plus the [AgustaWestland] Lynx with the Mokopa. That is very important.”

On the other hand, he saw only limited short-term opportunity for Mokopa with the land services. “Most armies won’t use it optimally, he says. Land-to-land targeting at 5.5km, as with Ingwe, is already a very long range for target acquisition. You cant’s see much further in the dust and glare of the battlefield. With Mokopa you go over-the-horison and then your communications and command-and-control has to be very advanced. Many armies are not yet confident enough to use such a weapon. The Ingwe is still very much on the sweet spot for most applications,” he said.

Wessels added in the May 2010 interview that his company and its subcontractor, Rheinmetall Denel Munitions, were working on a new series of warheads. This included a multi-purpose warhead with some penetration capability but also blast. The company has also done “some studies” on thermobaric warheads. “We know what the technology can offer,” Wessels said.

Speaking at the SAAF’s Air Capability Demonstration at Roodewal in Limpopo on Thursday Gagiano said that although the five Block 1F aircraft delivered to date was now fully operational it was not envisaged that the system would be available for deployment outside the country this calendar year. “The need for deployments come from the UN, but at this stage it is not ready for deployment yet, with training of crews still taking place,” he said, adding the United Nations had a need for more Oryx.

Project Impose dates back 27 years to March 1984. The cost of the programme remains elusive but is said to have been over R8 billion by 2006. It is known a further R234.3 million has been spent since February 2007. Kgobe in April this year said South Africa is one of only nine countries in the world to have developed and engineered its own combat support helicopter.