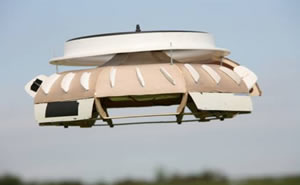 A new family of Unmanned Airborne Systems has made its appearance at the UV Europe Conference being held in , , today.

AESIR, named after a family of Norse gods, has developed a family of Vertical Take Off and Landing (VTOL) Unmanned Airborne Vehicles (UAVs) designed to operate in both urban and rural environments providing a platform suitable for tasks including surveillance and cargo lift.

A company statement says the VTOL craft utilise the Coanda effect to generate lift and have inherent stability as a surveillance platform. The design has no external rotating parts and can survive low speed impact with the ground, buildings and other fixed objects.
“The AESIR craft offer considerable benefits over similar sized UAVs, not only is the space under the canopy fully useable but the design means that we are able to lift a much larger payload,” said Chris Newland, CEO of Aesir Ltd.

“Though we have designed a range of products we also have the capability to customise these to meet a range of options depending on requirements,” he added.

The AESIR UAVs provide a sustained hover capability, have a large payload capacity when compared to similar sized fixed wing craft and have been designed to use “plug-and-play” payloads resulting in considerable flexibility. Designed into the craft is an effective perch-and-stare capability.

Vidar is a man portable craft designed to provide surveillance and situational awareness inside buildings and in close confined spaces. It has an electric engine powered by Lithium Polymer batteries and a 15 minute endurance with a 100g payload.

Odin is fitted with a rotary internal combustion engine and can carry a 10kg payload for up to an hour. Fitted with an autonomous flight control system and managed through a simple to operate ground control system, it can be adapted to a range of tasks including ISTAR, communications relay, electronic warfare, asset protection, IED detection and can be used as a loitering munition.

Hoder is a heavy lift craft capable of carrying a one tonne payload. It is primarily intended for cargo transport but can easily be adapted to become a long endurance craft by reducing the payload and increasing the fuel. Hoder is in the early stages of development but is expected that it will be multi-engined.