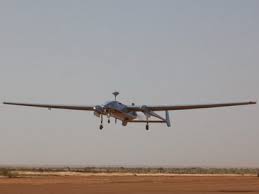 The Heron I unmanned aerial vehicle (UAV) has flown its first operational mission in Mali on behalf of the German military as part of a contract with Airbus Defence and Space.

The first operational mission took place on 1 November from Gao airport and lasted five hours and 40 minutes. Airbus said it occurred three months after the signing of the contract with Germany.
“The first flight is an important step to obtain the declaration of full operational capability (FOC). To achieve FOC, three aircraft will be stationed in Gao and reconnaissance missions will be carried out focusing on the north-east of the country in order to protect the citizens and MINUSMA personnel,” Airbus said.

Similar to the operator model for the Heron I in Afghanistan (where the UAVs have flown over 2 300 missions), Airbus Defence and Space Airborne Solutions GmbH (ADAS) is responsible for the provision, maintenance and overhaul of the system in Mali. The aircraft are leased from their manufacturer Israel Aerospace Industries (IAI).

This operation follows an agreement signed on 21 July by the Federal Office of Bundeswehr Equipment, Information Technology and In-Service Support (BAAINBw) and ADAS. The deployment of the Heron I in Mali is planned initially until February 2018.

The Heron I has a wingspan of seventeen meters and has a maximum mission endurance of more than twenty-four hours and range of up to 800 kilometres. Military tasks include tracking down explosives from the air, assist in convoying and patrolling, providing reconnaissance to ground forces in combat situations, exploration of tracks, creating movement profiles and long-term monitoring, support for situation assessment as well as camp and force protection.

As from 1 July this year the Bundeswehr took over responsibility for the intelligence unit in Mali from the Netherlands. In the perimeter of the UN MINUSMA mission, German forces are taking on tasks mainly in the Gao region.

The extension of the Heron I operational model is paving the way for the next generation Heron TP, which has been selected by the German Bundeswehr Chief of Staff to succeed the Heron I and bridge the timeframe until a European drone development will be available.

The German defence ministry on 1 November announced it was playing another role in Mali by contributing helicopters to Minusma to fill the gap by the departure of the Dutch Helicopter Detachment (HELIDET) in early 2017.

The Dutch government will withdraw its four AH-64D Apaches and three CH-47D Chinooks after two years of operations. It is not clear how many or of what type of helicopters Germany will deploy to Mali.

UAVs are playing an ever larger role in global peacekeeping operations, with the United Nations flying them in several missions, including the Democratic Republic of Congo. In Mali, a Swedish UN contingent has deployed the Textron Unmanned Systems Shadow 200 UAV and AeroVironment Puma AE and Wasp small UAVs in support of MINUSMA. This deployment reached full operational capability in May last year and is due to continue operating until 2017.

Due to the Shadow’s short range and the need for greater payload, the United Nations last year began seeking a larger UAV to operate in the northern part of Mali. MINUSMA signed a contract with Thales UK in December 2015 to operate Eblit Hermes 900s for three years with an option for a further two years.

The contract covers the deployment of three aircraft (two for operational duties, the third as a spare) with two control stations and flight crews to enable the simultaneous use of both aircraft. The aircraft are being flown from Timbuktu airport in Mali.

The Hermes 900 was the first medium-altitude, long endurance (MALE) UAV to be flown in support of United Nations missions.

France has also deployed UAVs to the region, with two Harfangs (based on the Heron) and three MQ-9 Reapers based in Niger but flying over five countries in the Sahel under Operation Barkhane.