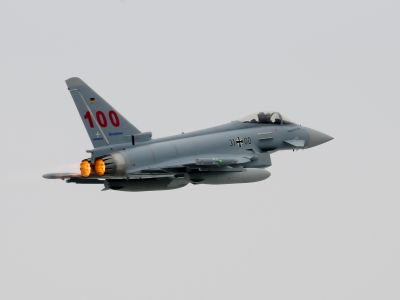 Cassidian handed over the 100th Eurofighter to the German Air Force today, at the Military Air Systems Centre in Manching. The anniversary aircraft with the identifier 31×00 took off in the afternoon on its delivery flight to Boelke Fighter Bomber Wing 31 in Noervenich.

Speaking to invited delegates who included politicians, representatives of the public authorities, the German armed forces and industry, Bernhard Gerwert, CEO of Cassidian, underscored the importance of this milestone for the company:
“The Eurofighter programme is and remains one of the essential pillars of Cassidian’s business. Eurofighter is the largest European high-tech programme and is the most modern multi-role combat aircraft on the market today. Together with the German Air Force, we can be proud that this programme is running soundly and successfully.”

General Lieutenant Karl Muellner, Chief of Staff of the German Air Force, said: “Due to its interoperability, modularity and growth potential, the multi-role weapon system, Eurofighter, is today, and will remain in future, the backbone of the German Air Force’s combat aircraft fleet, particularly in light of the new orientation of our armed forces.”

The German Air Force received its first Eurofighter from Cassidian at the beginning of 2003. The combat aircraft was launched in Germany in 2004 and since then has flown more than 30,000 flight hours without accident. The Eurofighter is currently operational at ‘Steinhoff’ Fighter Wing 73 in Laage, Fighter Wing 74 in Neuburg and ‘Boelke’ Fighter Bomber Wing 31 in Noervenich.

The Eurofighter is the most modern and capable multi-role combat aircraft currently on the market. Currently, seven nations (Germany, the UK, Italy, Spain, Austria, Saudi Arabia and Oman) have procured the Eurofighter. At present, the aircraft are being operated by 20 operative entities worldwide. To date, the Eurofighter fleet has completed more than 160,000 flight hours globally. It is thus the safest and one of the most reliable combat aircraft in operational use.

With 719 aircraft under contract, 571 orders and 355 deliveries, the Eurofighter is currently the largest military procurement programme in Europe and, thanks to its high technology, boosts the European aviation industry’s standing in international competition. The programme means work for more than 100,000 people at 400 companies. Eurofighter Jagdflugzeug GmbH manages the programme on behalf of the Eurofighter partner companies Alenia Aermacchi/Finmeccanica, BAE Systems and Cassidian in Germany and Spain.

Cassidian, an EADS company, is a worldwide leader in global security solutions and systems, providing Lead Systems Integration and value-added products and services to civil and military customers around the globe: air systems (aircraft and unmanned aerial systems), land, naval and joint systems, intelligence and surveillance, cyber security, secure communications, test systems, missiles, services and support solutions. In 2012, Cassidian – with around 23,000 employees – achieved revenues of € 5.7 billion. EADS is a global leader in aerospace, defence and related services. In 2012, the Group – comprising Airbus, Astrium, Cassidian and Eurocopter – generated revenues of € 56,5 billion and employed a workforce of more than 140,000.