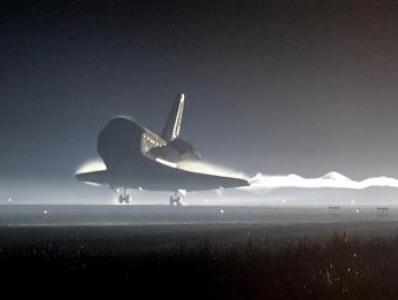 The space shuttle Atlantis returned from NASA’s final shuttle mission ending a 30-year era that opened the space frontier, exposed its dangers and established a toehold for future endeavours beyond Earth.

NASA workers lined the runway at the Kennedy Space Centre before dawn to greet Atlantis and its crew upon their return from a successful 13-day cargo run to the International Space Station and to celebrate the conclusion of the shuttle program after 135 flights.
“I saw grown men and and grown women crying today, tears of joy to be sure,” said shuttle launch director Mike Leinbach. “Human emotions came out the runway today. You couldn’t suppress them.”

Sailing through an unusually clear and moonlit night, Atlantis commander Chris Ferguson gently steered the 100-tonne spaceship high overhead, then nose-dived towards the swamp-surrounded landing strip a few miles from where Atlantis will go on display as a museum piece, Reuters reports.

Double sonic booms shattered the silence around the space centre, the last time residents will hear the distinctive sound of a shuttle coming home.

Kennedy Space Centre director Bob Cabana later told reporters: “It’s been our number one goal the last couple of years to safely fly out the shuttle program, and we accomplished that.”

The last accident investigation board recommended the shuttles be retired after construction was finished on the space station, a $100 billion (61 billion pounds) project of 16 nations. That milestone was reached this year, leaving the orbiting research station as the shuttle program’s crowning legacy.
“Its job is done and we got them back and can put them safely in museums and be proud of what they did,” said veteran astronaut Stephen Robinson, who was among those on the runway.

Details of a follow-on program are still pending, but the objective is to build new spaceships that can travel beyond the station’s near-Earth orbit and send astronauts to the moon, asteroids and other destinations in deep space.

The final shuttle crew included just four astronauts — Ferguson, pilot Doug Hurley, flight engineer Rex Walheim and mission specialist Sandy Magnus — rather than the typical six or seven, a precaution in case Atlantis was too damaged to safely attempt the return to Earth. With no more shuttles available for a rescue, NASA’s backup plan was to rely on the smaller Russian Soyuz capsules.
“The things that you’ve done will set us up for exploration of the future,” NASA Administrator Charles Bolden told the “final four” astronauts as they emerged from their ship.

Ferguson thanked the thousands of workers involved in the program over the years and said he hoped “this fantastic vehicle” would inspire a new generation of space explorers.
“Although we got to take the ride, we sure hope that everybody who has ever worked on or touched or looked at or envied or admired a space shuttle was able to take just a little part of the journey with us,” Ferguson said.

Thousands more employees gathered with their families to watch the landing on a giant television at the Johnson Space Centre in Houston, home of Mission Control and NASA’s main astronaut training facility. As the shuttle touched down, a cheer arose through the crowd that gathered outside the centre’s headquarters building.

But now that Atlantis is home, 3,200 of the shuttle program’s 5,500 contract workers will lose their jobs on Friday. Within about a month, the contract workforce that totalled about 16,000 five years ago will tail off to about 1,000 people who will oversee the transfer of Atlantis and sister ships Discovery and Endeavour to museums.

The shuttles’ retirement opens the door for a new commercial space transportation industry. NASA will be relying on U.S. companies to deliver cargo to the station starting next year and to fly its astronauts there by about 2015.

Until space taxis are available, Russia will take on the job of flying crews to the station, at a cost of more than $50 million per person.

The primary goal of Atlantis’ flight was to deliver a year’s worth of supplies to the station in case NASA’s newly hired cargo suppliers, Space Exploration Technologies and Orbital Sciences Corp, encounter delays preparing their new vehicles for flight.