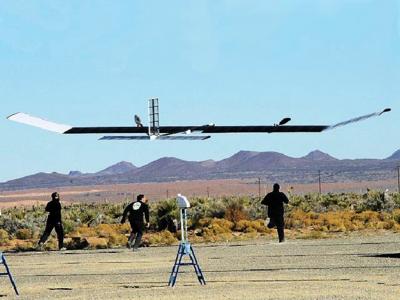 Airbus Defence and Space believes the unmanned aerial vehicle (UAV) market is poised for massive growth, and it is seeking to become involved in this sector, through technology like its Zephyr pseudo-satellite.

Jean Pierre Talamoni, Head of Sales and Marketing at Airbus Military Aircraft, said UAVs represent a small portion of defence expenditure but will see the highest growth in the coming years.

Jana Rosenmann, Head of Unmanned Aerial Systems at Airbus Defence and Space, said there is great opportunity in the UAV space but there is also major uncertainty. For instance, different forecasts predict the value of the UAV market to be worth between $2.8 and $17 billion in 2020. One thing for certain is the commercial UAV market overtaking the military market in the near future.

Rosenmann predicts that the global UAV market will rise from around $10.5 billion in 2016 to nearly $18 billion in 2025, with two thirds of that coming from the United States. Medium altitude, long endurance (MALE) UAVs are predicted to make up the vast majority of market value.

She told media in Germany this week that Airbus is ‘crossing the Rubicon’ and moving into the commercial market and has spent a lot of time engaging with this market. “Everybody is talking about the civil market, with a focus on small consumer drones, of which thousands are flying around.” She said Airbus is looking to see what strategy to take with regard to the commercial market.

One example of out of the box thinking with regard to UAVs is the Zephyr pseudo satellite, a solar powered aircraft operating in the stratosphere above weather and regular air traffic. Its main applications are surveillance, communications and Internet. So far it has flown 900 hours, including a single flight that lasted 14 days.

The Zephyr S (single tail) has a wingspan of 25 metres, payload of 5 kg and weight of 55 kg but Airbus is working on the larger Zephyr T (twin tail), with a 33 metre wingspan, weight of 140 kg and 20 kg payload. The United Kingdom Ministry of Defence has ordered two for a capability demonstration next year, and is in negotiations for a third.

Rosenmann said she saw enormous UAV potential from the commercial world, with Airbus in negotiations with information technology companies in this regard, with a focus on providing hubs for Internet connectivity, with military contracts following on from those.

At the moment Airbus Defence and Space is leasing Heron I UAVs to the Germany military, which uses them in Afghanistan, will supply the Heron TP to Germany and is working on a future European MALE UAV together with Dassault and Leonardo. Launch of the development and production programme for the latter is expected in late 2018. Airbus will sign a definition study contract for the European MALE by mid-July, ahead of the commencement of development work on the project in September.

Also referred to as MALE2020, the European MALE RPAS project was launched in May 2014 with the goal of providing an unmanned capability to the armed forces of France, Germany, and Italy, reports IHS Jane’s.