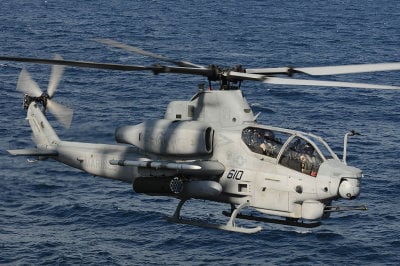 The Bell AH-1Z “Zulu Cobra”, the latest iteration of the venerable attack helicopter, has achieved initial operating capability (IOC) with the US Marine Corps following years of delays.

“Getting the AH-1Z to IOC [in February] has been a huge achievement for the entire team,” said Colonel Harry Hewson, programme manager for US Marine Corps Light and Attack Helicopters. “Now we get to put the Zulu in the hands of the Marines and prove that it is indeed the most capable marinised attack helicopter in the world.”

The AH-1Z and UH-1Y programme was originally launched in 1996 by Marine Corps and proceeded slowly between 1996 to 2003 as a result of a drawn out research and development programme. The AH-1Z first flew in December 2000.

In 2004 the Marine Corps hoped to have the AH-1Z finish testing in April the next year and enter full rate production in February 2006, with IOC in June 2009. However, the AH-1Z only completed development testing in early 2006 and operational evaluation testing began in February 2008. Testing was halted in 2008 due to issues with the targeting system. The AH-1Z completed its operational evaluation in September 2010, paving the way for the US Department of Defence to authorize full-rate production in November.

Full operational capability with 189 aircraft in service is expected in 2020 and the AH-1Z will remain in service with the USMC beyond 2025. The long delays are the results of the Marine Corp’s aim to change the procurement profile to expedite the replacement of the ageing UH-1 fleet.

The first deployment of the AH-1Z is scheduled for later this year with a Marine Expeditionary Unit. This will be the first opportunity for the AH-1Z and UH-1Y to deploy together. The UH-1Y is already on its third rotation to Operation Enduring Freedom in Afghanistan. The UH-1Y and AH-1Z will share 84% of component parts, creating maintenance synergies and significantly lower operating costs. Due to all the new technology used in the AH-1Z and commonality of parts, maintenance costs will be reduced by 70% compared to earlier models.
“The expeditionary agility that the Yankee/Zulu package brings to the Marine Air/Ground Task Force is exactly what the Marine Corps needs as we continue to fight two wars and conduct numerous other engagements in every clime and place,” Hewson said. “I am proud to be a part of the team that is making that happen.”

The AH-1Z’s main missions include assault support, offensive air support and air reconnaissance. However, the Cobras will also play a supporting role in anti-air warfare, electronic warfare, and the control of aircraft and missiles, the Naval Air Systems Command said.

The AH-1Z is powered by two General Electric T700-GE-401C engines that greatly increase its ordnance payload. The engines have infrared suppression systems to reduce the exhaust signature.

The AH-1Z’s primary weapon system is the Hellfire missile, 16 of which can be carried. In addition two AIM-9 Sidewinder air-to-air missiles can be carried, together with rocket launchers. The helicopter’s main gun is a 20 mm cannon.