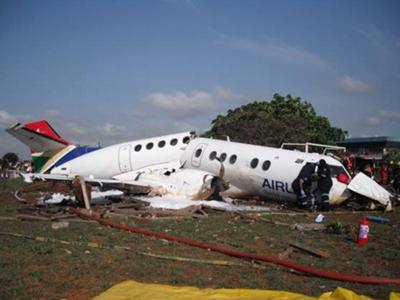 The review says Africa south of the Sahara had an accident rate of 9.94 last year, “significantly higher than their 2008 rate of 2.12. Africa has once again the worst rate of the world. There were five Western-built jet hull losses with African carriers in 2009. African carriers are 2% of global traffic, but 26% of global western-built jet hull losses.”

The Middle East and North Africa region also saw its accident rate rise to 3.32 (compared to 1.89 in 2008) with four accidents involving carriers from the region,” IATA said.

“Safety is the industry’s number one priority. Even in a decade during which airlines lost an average of US$5 billion per year, we still managed to improve our safety record. Last year, 2.3 billion people flew safely. But every fatality is a human tragedy that reminds us of the ultimate goal of zero accidents and zero fatalities,” says Giovanni Bisignani, IATA’s Director General and CEO.


IATA member airlines outperformed the industry average with a Western-built jet hull accident rate of 0.62. That rate is equal to one accident for every 1.6 million flights. “In 2009 IATA marked an important milestone in aviation safety. From April 1, all IATA members were on the registry of the IATA Operational Safety Audit—a testimony to our commitment to the highest global standards for operational safety. IOSA is the global standard. Today 332 carriers are on the registry, including IATA’s 231 members,” said Bisignani.

There are significant regional differences in the accident rate:

North Asia, Latin America and the Caribbean as well as the Commonwealth of Independent States (CIS) had zero western-built jet hull losses in 2009

Asia-Pacific’s accident rate worsened to 0.86 in 2009 (compared to 0.58 in 2008) with three accidents involving carriers from the region.

An analysis of the causes of the 2009 accidents focuses on three main areas:

Runway excursions continue to be a challenge and accounted for 26% of all accidents in 2009. However, the total number of runway excursions dropped by 18% (23 vs 28 in 2008). IATA released its Runway Excursion Risk Reduction Toolkit in 2009, with an updated version to be produced later this year. The toolkit is incorporated with IATA’s broad ranging safety data tools in the IATA Global Safety Information Center (GSIC), a customisable website which will enable users to extract relevant safety information through a single application and enable them to perform performance benchmark and conduct trend analysis and risk management.

Ground damage accounted for 10% of all accidents in 2009. To improve safety and reduce this US$4 billion annual industry cost, IATA introduced the IATA Safety Audit for Ground Operations (ISAGO). Built on similar principles to IOSA, ISAGO is the industry’s first global standard for the oversight and auditing of ground handling companies. The first audits took place in 2008. To date a total of 149 audits have been conducted.

While runway excursions and ground damage were the main categories of accidents, pilot handling was noted as a contributing factor in 30% of all accidents. IATA’s Training & Qualification Initiative (ITQI) is pushing for harmonizing a competency-based approach focused on training real skills while addressing threats presented by accident/incident reports and flight data collection and reporting. IATA will also work through ICAO to develop a Fatigue Risk Management System as part of the Safety Management System. This will be a new process to systematically manage crew fatigue taking into account changes in aircraft capabilities and airline operations.

These initiatives are consistent with IATA’s comprehensive Six-point Safety Program which focuses on infrastructure safety, safety data management and analysis, operations, Safety Management Systems, maintenance and auditing.
“Safety is a constant challenge. Having made aviation the safest way to travel, further improvements will come only with careful data analysis. We must understand the underlying safety risk trends, not just from the handful of accidents each year, but by bringing together and analyzing data from millions of safe flights.
“The IATA Global Safety Information Center was launched in December 2009 for just that purpose. Going forward our goal is to work with other organizations and governments involved in aviation safety to add to the database and drive even more improvements,” adds Bisignani.

Pic: The wreck of an SA Airlink BAE Systems Jetstream 41 that crashed in Durban on September 24. 2009.