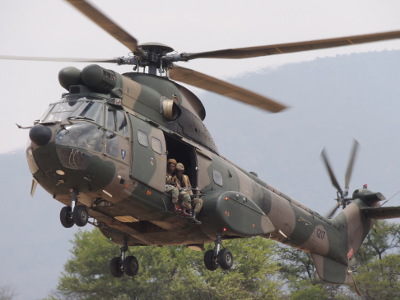 Denel Aviation will conclude the avionics upgrade of 39 of the South African Air Force’s Oryx transport helicopters in January 2016 after years of delays.

Denel in its 2015 annual report noted that it was in 2007 contracted for the upgrade of the onboard avionics and navigation systems of the Oryx helicopters. The R492 million fixed price, fixed-term contract was originally due to be completed by June 2012. “However, due to extended engineering and flight test efforts, the programme was delayed. During 2013/14, a contract variation order addressing changes in timelines was received from the client. The new completion date is scheduled for January 2016 and the programme is on track to meet the newly agreed timeline.”

Denel said in its report released this week that qualification and certification of the system upgrade has been completed. “To date 26 of the 39 aircraft have been modified and some have been released for operational deployment by the customer.
“The programme accounted for revenue of R68m (2013/14: R30m) during the year. The provision for onerous contracts in respect of this project is R156m.”

The Oryx first flew on September 18, 1987 and deliveries commenced in May 1989. Denel Aviation assembled 51 aircraft of which 39 remain in service. The Oryx replaced the Aerospatiale SA330 Puma in South African Air Force service. The helicopter forms the backbone of the Air Force’s rotary wing transport fleet and has been deployed overseas on peace support operations, such as to the Democratic Republic of Congo.

Denel Aviation is the primary maintenance, repair and overhaul (MRO) provider for the Oryx as well as Rooivalk helicopters and is responsible for their continued airworthiness.

Regarding the Rooivalk, Denel noted that as a result of its successful deployment, the Department of Defence and Military Veterans (DoD&MV) is supporting a study for the possible upgrade of the current Rooivalk Mk1F baseline and future development of a Rooivalk Mk 2 for both local and export markets.

Denel Group CEO Riaz Saloojee said that, “the Rooivalk, a state-of-the-art combat support helicopter, has long been held as an example of what we can achieve as South Africans. The successful deployment of the Rooivalk by the SAAF in the eastern Democratic Republic of the Congo (DRC) for peace enforcement operations, complemented by demonstrations on the two public viewing days at AAD [Africa Aerospace and Defence exhibition] and at the air capability demonstration hosted by the SAAF at its weapons range, has confirmed the stature of the aircraft. We are excited by the latest developments, i.e. the upgrade of the Rooivalk fleet, as well as the possibility of an opportunity to develop the new Rooivalk.”
“The current Rooivalk Mk1F baseline as deployed will require a midlife upgrade due to future additional functional requirements. Denel is in discussions with the SAAF regarding the Rooivalk roadmap to define and upgrade the current Rooivalk baseline, as well as the possible development and manufacturing of additional aircraft at a Rooivalk Mk2 baseline,” Denel said in its annual report.
“Denel has proposed an implementation plan to the SAAF and the DoD&MV is expediting allocation of funding to the programme. The proposed development of Rooivalk will be a catalyst to revive capabilities for technology development and manufacturing enhancement in the local industry.”

Denel Aviation’s revenue for the 2015 financial year amounted to R1.155 billion, up from R1 billion in 2014. Its earnings before interest and tax (EBIT) were recorded as R68 million, up 3% from 2014 (R66 million). Exports accounted for 16 of revenue, with the remaining 84% coming from local business.